From the 14th to the 16th of November the city of Lisbon hosted the 12th Annual Scientific Meeting of the European Elasmobranch Association (EEA). The EEA was established in 1996 as a non-profit share-holding organization, which co-ordinates the activities of all national European organizations dedicated to the study, management or conservation of chondrichthyans (sharks, skates, rays and chimaeras). 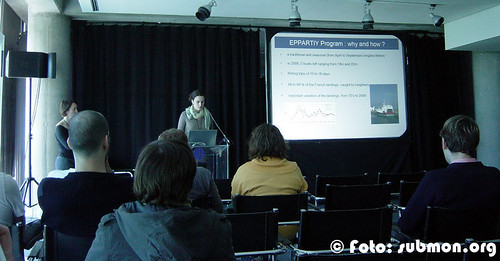 Alex Bartolí, head of elasmobrach conservation projects in Submón, and Aitana Oltra, author of the paper, presented the poster “Much more than one skate and two catsharks: the unreliability of official statistics from fish auctions in NE Spain” which, through a pilot study conducted at the harbour of Blanes, explains and shows the unreality of the statistics of elasmobranch fishing due to bad practices in the labelling during the auction.

On the other hand, the assembly of the EEA Congress approved four resolutions to be submitted to the annual meeting of the ICCAT (International Commission for the Conservation of Atlantic Tunas), the Convention on Migratory Species (CMS), 2009 EU fishing limits, and the European Community Plan of Action (CPOA) for Sharks, demanding an increase of elasmobranch protection and conservation strategies, as well as an effective management of their fisheries, based on scientific criteria.

– The EEA urged countries to support proposals to list threatened migratory sharks on the CMS Appendices and to develop a binding agreement to complement existing measures and provide a framework for developing conservation measures for threatened migratory shark species. Parties will consider an EU proposal to add spiny dogfish and porbeagle sharks to the CMS Appendices, as well as a Croatian proposal to list longfin and shortfin mako sharks.

– The EEA agreed to call on the European Commission and EU Fisheries and Environment Ministries related to work together to finalize and implement a shark CPOA, as soon as possible, that sets the stage for science-based catch limits, protection for endangered species, recovery plans for depleted populations, conservation of biodiversity and habitat, and an overall higher priority and more precautionary approach to elasmobranch conservation.

Some of the pages of the SUBMON site contain cookies, which are small data files generated in the computer of the user or client which enable the system to remember the language and site, as well as other characteristics and navigation preferences chosen by the user during their first visit. These cookies are not invasive, nor do they carry virus or personal data, and their only function is to personalise navigation according to the choices made previously by the user. If you wish, you can deactivate and/or eliminate cookies by following the instructions which appear in our Security Recommendations .
Necessary Sempre activat
Necessary cookies are absolutely essential for the website to function properly. This category only includes cookies that ensures basic functionalities and security features of the website. These cookies do not store any personal information.
Non-necessary
Any cookies that may not be particularly necessary for the website to function and is used specifically to collect user personal data via analytics, ads, other embedded contents are termed as non-necessary cookies. It is mandatory to procure user consent prior to running these cookies on your website.
DESA I ACCEPTA
SearchPostsLoginCart
Tortugues marines… a Alaska?
Boscos d’animals marins: la valentia política necessària per protegir-los
Les cremes solars ens protegeixen però, perjudiquen el medi marí?
Finalitzem el projecte EDUCAMARES amb més de 7100 alumnes sensibilitzats
Ha estat un Dia Marítim Europeu reeixit!
Obertes inscripcions i enviament de resums pel Sharks International 2022