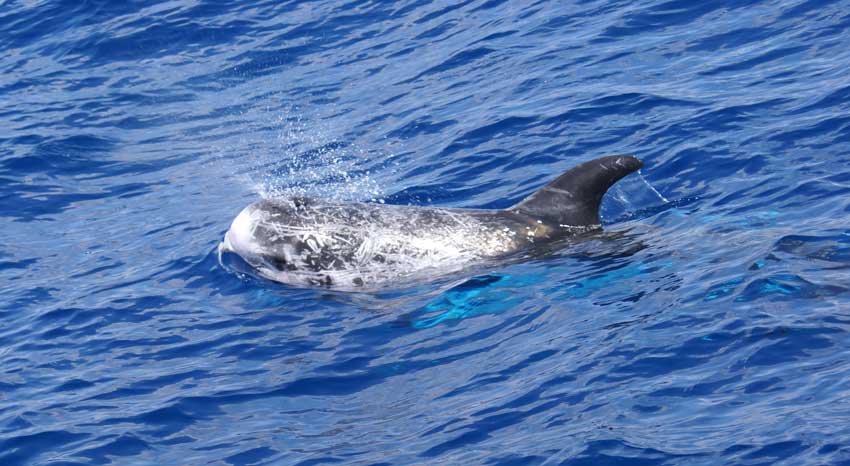 The project revolves around monitoring and managing the Risso’s dolphin population (Grampus griseus) in the Western Mediterranean.

A marine stewardship program was implemented in 2009 in the “Maresme Canyons” area, a vast zone (3200 km2) located off the central coast of Catalonia (NE Spain). This area includes four deep submarine canyons, providing an ideal habitat for a wide variety of species, including the Risso’s dolphin (Grampus griseus).

Risso’s dolphin is one of the least-studied species in the Mediterranean. It is currently catalogued as a “data-deficient” species on the UICN red list, but it is not included in the Habitat Directive.

On one hand, the objective of this project was to study the Risso’s dolphin in the area (density, habitat use, seasonal patterns, group structure, etc.) to obtain sufficient information for better study and management of the population. On the other, it aimed to use marine stewardship tools to involve different sectors interested in cetacean conservation.

#ProjecteGrampus was created for the purposes of:

In order to improve the study and conservation of cetaceans in this area, in 2015 we worked with different sectors (sailors, fishermen, scientists and the local administration) in order to raise awareness and foster multi-sector collaboration to boost conservation of this marine ecosystem. The agreements reached led to the creation of a bio-political lobby to promote protection of the marine area.

Some of the Risso’s dolphin’s prey, mostly cephalopods live on the continental shelf suggesting possible interaction with trawling.

The data were provided to encourage changing the category and applying for the Risso’s dolphin to be included as a “vulnerable” species in the Spanish National Catalogue of Endangered Species.

Grampus Project had the support of Fundación Biodiversidad.