Why do sea turtles cry?

If you have ever been lucky enough to observe a sea turtle out of the water, when it comes out to nest on a beach, you may have noticed that it seems to be crying. Do they know something we do not? 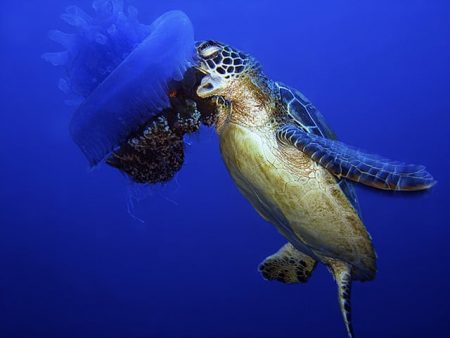 In fact, it is a normal mechanism in these animals adapted to life in the sea, by which they can get rid of excess salt in their bodies. Sea turtles, like all other vertebrates, have a salt concentration in their body fluids of about one third of the salt concentration in seawater. However, their main foods (jellyfish, marine invertebrates, algae and phanerogams, etc.) have the same salt concentration as seawater. Moreover, when ingesting food within the marine environment, it is almost impossible to prevent seawater from entering at the same time. This large amount of salt ingested would affect many vital functions of the animal and could cause its death.

To cope with this excess of seawater and salt, sea turtles have developed two mechanisms that we explain below.

To reduce the possibility of swallowing seawater when feeding, sea turtles have a very special and characteristic esophagus, lined with keratinized conical “spines” called papillae. These papillae are oriented towards the stomach and cover the entire esophagus, which also has highly developed muscles. Thus, when a turtle ingests, for example, a jellyfish and it reaches the esophagus, the muscles of the esophagus begin to contract to remove the water that has entered. The papillae prevent the food from “escaping” along with the water. 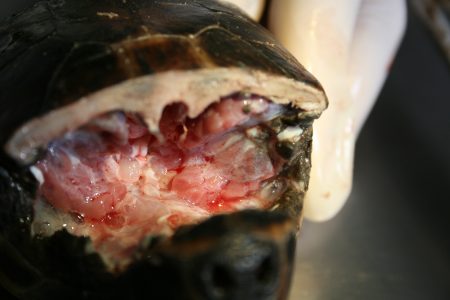 Salt glands larger than the brain

Sea turtle kidneys cannot remove such high amounts of salt. However, the lacrimal glands have been modified in such a way that, when stimulated by high levels of salt in the blood, they excrete a saline solution that is twice as concentrated as seawater. The result is that for every liter of seawater ingested, the turtle excretes 500ml of tears that are twice as concentrated, thus “gaining” 500ml of freshwater. These glands are located just behind the eyes and are much larger than the brain.

When they are in the water, these tears are quickly diluted and cannot be seen; they can only be seen when the animal is out of the water. At these times, moreover, the tears help to protect the eyes from the sand on the beach and to keep the eyes hydrated and prevent them from drying out during the hours it takes to nest. There are other animal groups that also have these salt glands, such as seabirds.

Tell us what else you would like to know about sea turtles, and we will tell you in another blog post!

Previous Story
Basking shark: a harmless giant in our waters
Next Story
What is the Natura 2000 Network?