The ocean sunfish or common mola (Mola mola) is an animal with an unusual appearance, that from the beginning of the spring begins to be seen more often near the surface of the oceans and seas, and which we usually find flapping its dorsal fin above the sea surface while swimming slowly or lying on their sides to bask in the sun.

A very common question is the reason for this behaviour, and there are two main purposes.  On the one hand, ocean sunfishes come to the surface and rest on their side for “sun-bathing” and warming up after diving into deep, cold waters searching for their prey.  Because of being an ectothermic animal, and therefore depending on the environment to regulate its body temperature, it is thought that it needs to return to the waters above the thermocline and recover its temperature after it has decreased during the deep dive.  On the other hand, they stay close to the water surface so they can get parasites removed by seabirds.  The ocean sunfish is known for its impressive parasitic charge.  As many as 66 species of different parasites have been recorded just on this species, some of which are even parasites of the same sunfish parasites.  In addition, it is not uncommon to see individuals breaching, a behaviour believed to be also related to parasite elimination.

To date, up to 5 different species of sunfishes (Mola mola, Mola tecta, Mola alexandrini, Masturus lanceolatus and Ranzania laevis) have been described, hereafter we will refer to the common mola or ocean sunfish (Mola mola), which can be found in tropical and temperate waters around the world, including in the Mediterranean Sea. 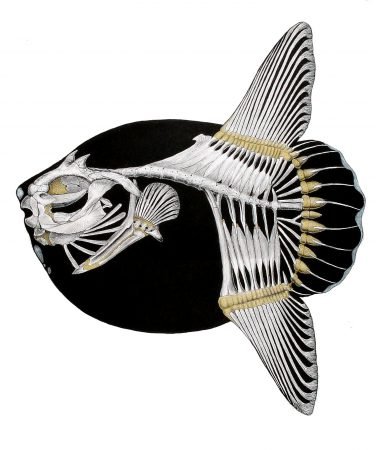 The mouth also gives it its characteristic appearance as the teeth in both jaws are fused into beak-like plates.

The sunfish gets its scientific name from its appearance, since Mola in Latin means “millstone” and describes the ocean sunfish’s circular shape and grey colour. It gets its common name “sunfish” from its habit of floating on its side, at the sea surface, warming itself in the sun.

Until recently, it was considered to be the world’s heaviest bony fish, with a record on an individual of 2300 kg and 2,72 m long, but it was recently confirmed that the animal was misidentified, and actually was a southern sunfish (Mola alexandrini).

Although sunfishes were initially thought to move slowly and passively following water currents, in recent years it has been observed that these animals are capable of making long journeys (up to 2520 km in 130 days) and dive to over 500 m (a maximum of 844 m) several times a day for feeding.  Generally, during the day, sunfishes move between deep, cool waters and warmer waters above the thermocline, alternating foraging and feeding with their temperature recovery (re-warming), while at night they remain close to the surface.  However, differences have been observed in this migratory dial pattern in some areas.

During the year, latitudinal migrations have been recorded, and it is thought to be driven by the sea surface temperature and food availability.  Individuals migrate to higher latitudes during the summer when productive waters warm up and return to lower latitudes as temperatures begin to drop as winter approaches.  Although not all individuals perform these migrations, a certain degree of residence has been observed in some individuals believed to be related to food availability and/or the animal size, so larger individuals would make the longest journeys.

Although it was believed that sunfishes feed mostly on jellyfish, recent studies have shown that their diet is probably much more varied by feeding on crustaceans, molluscs and fish.  Ocean sunfishes undergo an ontogenetic shift in diet, where smaller individuals feed broadly on high energy-density benthic prey in coastal environments, while larger fishes are found offshore, where they shift to a diet of predominantly gelatinous (jellyfish) organisms.

There is little information about the reproduction of this species, but it is known to be one of the most fecund of all vertebrates since a 1.4 m long female was found with 300 million eggs of about 1.3 mm in diameter in the ovary.

At birth, the larvae have a head-pin size and three developmental stages will be needed before reaching adulthood, which may require a 60 million times mass increase.

The ocean sunfish has few natural predators, including sharks, orcas and sea lions. Nowadays, the biggest threat for the species is bycatch. It is considered a “vulnerable” species by the IUCN (International Union for Conservation of Nature) and its population has a decreasing trend.
Considering the ongoing mass catch of sunfishes, the removal of this wide-ranging mesopredator may have far-reaching implications for a variety of marine systems and therefore it is imperative to work for its conservation.

Previous Story
The importance of being prepared
Next Story
Seagrasses: the great (un)known