We started the second phase of the SCARS Project thanks to the support of Goodman, Mares Sostenibles and Fundación Biodiversidad.

The Goodman Group, Mares Sostenibles and SUBMON have signed a collaboration agreement to carry out the second phase of the SCARS Project, with the aim of studying the distribution, abundance, and movements of the Risso’s dolphin in the canyons off the coast of Catalonia. The project also has the support of the Fundación Biodiversidad of the Ministry for Ecological Transition and the Demographic Challenge. 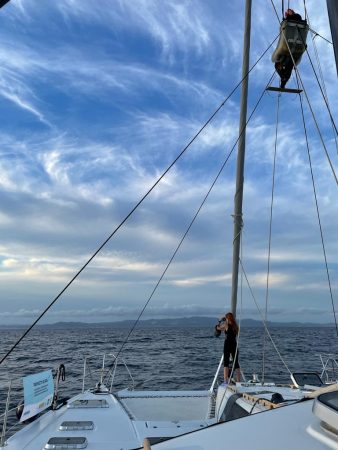 The Project “SCARS: expanding knowledge of the Risso’s pilot whale (Grampus griseus) in the waters of the Levantine-Balearic demarcation” aims to study the distribution, abundance and movements of the Risso’s pilot whale population in the Levantine-Balearic demarcation and, specifically, in the submarine canyons off the coast of Catalonia. The project has the support of the Biodiversity Foundation, the Ministry for Ecological Transition and the Demographic Challenge and now also the support of the Goodman Group, through the company Mares Sostenibles.

The study area is divided into three areas that encompass the different submarine canyons along the Catalan coast. The project began at the beginning of May and two of the three planned areas were studied, the Palamós and Maresme canyons. During this first phase, the 8 most common species of cetaceans in the Mediterranean Sea were found and more than 100 sightings were made. During the second phase, which begins at the end of September, SUBMON’s scientific team will set off from the Port of Sitges to study the underwater canyons of Garraf and Tarragona.

The Risso’s pilot whale in the Mediterranean: a great unknown

The Risso’s dolphin (Grampus griseus) is one of the least known and least studied dolphins in the Mediterranean. It is on the International Union for Conservation of Nature (IUCN) Red List of Threatened Species, which considers the Mediterranean subpopulation of this species in the “Data Deficient” conservation category.

However, despite the little information available, in recent years a population decline has been observed in the northwest Mediterranean, specifically in the Gulf of Lions and Ligurian Sea. This fact increases the need to increase knowledge on the abundance, distribution and trend of the Mediterranean subpopulation of the Risso’s dolphin in order to understand its status and work on the conservation of this species.

The SCARS Project owes its name to the abundant scars that Risso’s pilot whales have all over their bodies. At birth, the calves are grey-brown in colour, but as they grow, their colouring becomes lighter, partly due to the marks and scars they make, especially with the teeth of other individuals in their own group when socialising, but also with other species with which they interact.

Previous Story
Save the date! Sharks International Conference is coming in 2022
Next Story
Incorporation of new staff

Forests of marine animals: the political courage needed to protect them

Forests are also "of the sea". They are even older...

Sunscreens protect us, but do they harm the marine environment?

Now that the good weather is here and summer is...