We started the COSTtERA project: Studying the underwater behaviour of bottlenose dolphins during their interaction with trawler nets in the north of Catalonia.

SUBMON starts the project “COSTtERA: Underwater behaviour of Tursiops truncatus in trawl nets in the north of Catalonia” with the collaboration of the Fundación Biodiversidad, of the Ministry for Ecological Transition and Demographic Challenge, through the Pleamar Programme, co-financed by the FEMP.

This project aims to study the behaviour of bottlenose dolphins (Tursiops truncatus) during their interaction with the fishing nets of trawlers and to determine the degree and type of fishing interaction that occurs in this area. The interaction between bottlenose dolphins and trawlers occurs in areas where there is a spatial overlap between their areas of distribution, as in many cases the target species of the fisheries are the cetaceans’ prey species.

This type of interaction has been described in multiple areas of the Mediterranean and is regularly observed in the waters off the Catalan coast, which is an important habitat for bottlenose dolphins. However, the impact of these interactions on both fishing operations and the dolphin population in this area is still unknown. 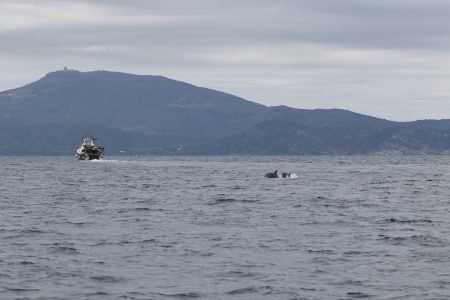 The study will be carried out in the northern area of Catalonia, in Girona, where since 2017 SUBMON has been working with the trawling sector around Cap de Creus, establishing a partnership to conserve marine ecosystems, especially the bottlenose dolphin population, and to promote territorial development based on the promotion of natural and cultural values.

In order to analyse how dolphins behave when chasing fishing nets and to determine whether and how they enter the nets to feed, a camera system will be used to record the feeding behaviour of bottlenose dolphins during fishing flights. The camera system will work in collaboration with the Llançà and Rosas fishermen’s associations, and priority will be given to vessels fishing at less than 200 meters, which is the area where the target species is present. In turn, the SUBMON team will record standardised data on the dolphins’ surface behaviour. This data will be analysed to establish repeating patterns that can be related to the images captured by the cameras, thus associating surface behaviour with underwater behaviour.

The project includes boat trips to study the presence and behaviour of dolphins in the waters of Cap de Creus during different times of the year (cold season, warm season, and closed season), which will also allow us to determine the degree of dependence of the populations of these cetaceans on this type of fishing. During these periodic trips, data will be taken on the species, position, group size, presence of calves, behaviour, etc. and photographs will be taken to photo-identify the different individuals. These data will allow us to determine the percentage of fishing association, the density of individuals and the distribution of bottlenose dolphins in the area, as well as to determine if there are seasonal differences or differences in the presence and absence of trawlers. 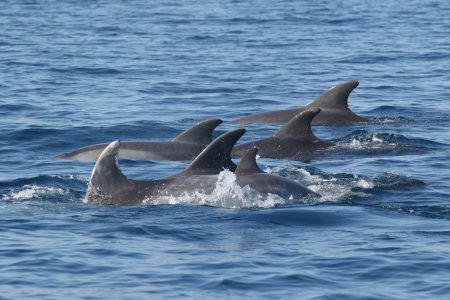 To carry out this study, the participation of the fishing sector in the study area plays a fundamental role, and for this reason, this project has the collaboration of the fishermen’s associations in the area and from the beginning will involve those trawl fishermen who wish to collaborate in the project. They will work together to design the study and determine the best equipment and material to use, as well as the best time and place to install the cameras in the network.

Subsequently, the images obtained will be viewed together with the fishermen, to review and compare with the behaviour recorded and the associated fishing activity (area, catches, etc.). Thus, based on the experience of the fishermen and the data obtained in this project, work will be done to determine the impact of these interactions and to define the best fishing practices to minimise their impact.

It is hoped that the results obtained will provide useful information to better understand the habits of bottlenose dolphins in the area, and to be able to propose future improvements in their conservation.