During a month and a half of campaign and 1375 km of effort navigated through the submarine canyons of northern Catalonia, the SUBMON team has made more than 160 sightings of cetaceans, of the 8 most common species in the Mediterranean and more than 150 acoustic detections of cetaceans.

The SCARS Project, which has the support of Fundación Biodiversidad of the Ministry for Ecological Transition and the Demographic Challenge and the Goodman Group, through the company Mares Sostenibles, has sought to expand knowledge about the Risso’s dolphin population in the north-eastern part of the Levantine-Balearic Demarcation with the aim of determining its distribution and abundance, as well as to study if there is connectivity between different areas of the Western Mediterranean and, therefore, the use of the Mediterranean Cetacean Migration Corridor by this species and other species of deep divers in the Marine Protected Area.

Sampling in the study area was planned following the linear transect methodology by distance, carrying out visual effort transects and acoustic transects. For the visual transect, a 15-meter long catamaran, the Montagu, equipped with a sighting platform, was used as a sampling platform. During the visual transect two observers, from a team of 6, located one in a raised coffer at 7.5 meters above sea level and the other at the foot of the deck, at 1.5 m and equipped with 7×50 reticulated binoculars, scan the 180º in front of the vessel while navigating at an average cruising speed of about 5 knots. 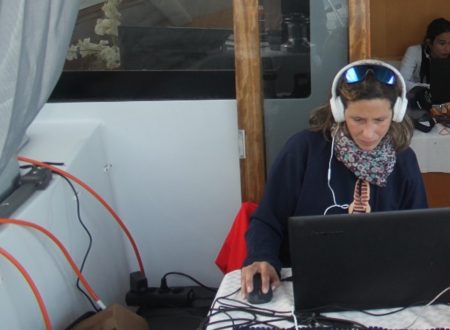 For the acoustic transect was used a three-channel, trawl hydrophone with 160 meters of cable, with three ceramic elements (100kHz) located at 140 and 143 and 146 m respectively. The trawl speed is maintained at about 5 knots average speed. The recording chain is carried out through a Steinberg UR44 audio interface analog to digital signal converter, as well as a computer, which with the PAMGUARD software (pamguard.org) allows the visualization of the sound and its interpretation by a specialized observer. 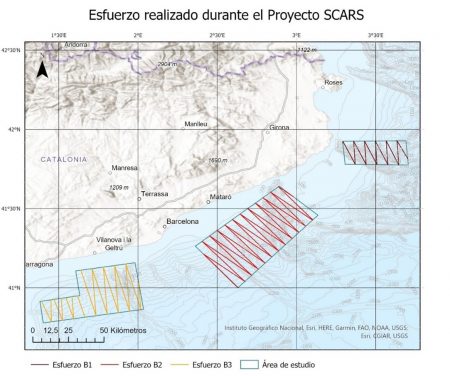 A total of 168 visual sightings of 8 different cetacean species were counted, 46 of which occurred off-effort.

A total of 155 acoustic detections were made, of which 12 were off-effort. Of the 143 on-effort detections, 104 (72.7 %) could be identified by sighting or by the acoustic behavioral characteristics of the species. The most identified species were the striped dolphin and the sperm whale with 79 detections for the former and 13 for the latter.

The depths at which the different species have been sighted have been analysed. It can be observed that the sightings of these species have been made between 164 m and 1960 m, being Cuvier’s beaked whale, common dolphin and Risso’s dolphin the species observed in a deeper zone.

From the photo-identification analysis, preliminary results indicate that for the Risso’s pilot whale no evidence has been found that the groups observed during the project had been sighted during the years prior to the project between canyons, although there were resightings among the individuals in the old catalogs between the Maresme and Palamós canyons, although these results are not conclusive due to the low number of sightings of the species. It has been possible to expand the catalog of individuals, which currently stands at 82 animals. During the SCARS project, 27 new animals have been identified.

As for the sperm whales, the analysis and comparison of catalogs, both from the project itself and from other entities, have documented the mobility of these animals between canyons for periods of time that reach 11 years apart. This represents evidence of biological connectivity between canyons and the species’ range.

The photo-identification catalog of the sperm whale was compared last year with the catalogs of this species of the Balearic Islands (Tursiops Association), with the online catalog CETIDMED/CETAPROT  containing images of the Strait of Gibraltar and Gulf of Vera and with photographs taken by the company Découverte du Vivant in the Gulf of Leon, as well as with the catalog of Tethys.

No resightings have been found with the Gibraltar catalog, but one possible resighting has been found with the Balearic Islands and two resightings in the Gulf of Lions. One of the re-sightings is a male observed by SUBMON on July 19, 2010 during the Life+ INDEMARES project at Cap de Creus and re-sighted on July 24, 2018 in the Sanary area. Therefore, after 8 years this individual is still frequenting the Gulf of Lion area.

During the present study we found another possible resighting of an individual seen in 2010 in the Creus canyon and seen again in 2021 in the Garraf canyons, 11 years apart. 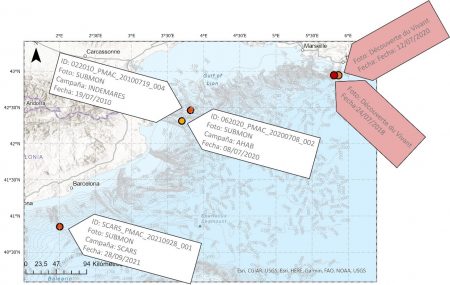 A possible recapture of an individual observed on July 13, 2020 as part of this project and a male identified by the Tursiops Association on several occasions, July 10, 2012, July 7, 2013, July 31, 2013 and August 2, 2015, was found. Due to the angle of the photograph, it is not possible to 100% confirm the recapture. But if so, it would confirm the connectivity between the Balearic Islands and the Peninsular east coast and thus the passage of sperm whales through the Mediterranean Cetacean Migration Corridor.

Abundance estimates and spatial modeling of species for which sufficient data have been obtained will be available in a report to be delivered to Fundación Biodiversidad, as well as to the General Directorate of Biodiversity, Forests and Desertification Ministry for Ecological Transition and Demographic Challenge. The report will be public and will be posted on various platforms. In addition, part of the study and results will be presented at the American Marine Mammal Congress, organized by the SMM (Society for Marine Mammalogy).

It has been possible to establish the connectivity that exists for some deep divers between the submarine canyons of northern Catalonia, thanks to the comparison of photo-identification catalogs. The study demonstrates the importance of the Mediterranean Cetacean Corridor and the deepest areas of the submarine canyons that it encompasses as areas of great connectivity between some species.