The first part of the SCARS Project comes to an end

The first part of the SCARS project ends having observed the 8 most common cetacean species in the Mediterranean and a high number of sea turtles.

The Project “SCARS: expanding the knowledge of the Risso’s dolphin (Grampus griseus) in the waters of the Levantine-Balearic demarcation” is supported by the Biodiversity Foundation, the Ministry for Ecological Transition and the Demographic Challenge and aims to study the distribution, abundance, and population movements of the Risso’s dolphin in the Levantine-Balearic demarcation and specifically in the submarine canyons off the coast of Catalonia.

In order to carry out this project and to monitor the cetacean species present in the Catalan submarine canyons, the SUBMON team has embarked on board the Montagu catamaran during the last month of May.

The study area is divided into 3 zones, along the underwater canyons on the Catalan coast. The project started at the beginning of May and two of the planned areas have been studied, the Palamós and Maresme canyons, and will continue next September studying the Garraf and Tarragona submarine canyons area.

So far, approximately 950 kilometers have been traveled in the study area, following the Distance Sampling methodology, which consists of traveling the area following transects that have been previously designed with specific software to achieve the same probability of coverage throughout the area. In total, more than 100 sightings of cetaceans and almost 100 acoustic detections have been made, thanks to the use of a drawn hydrophone that allows detecting individuals, even if they are not on the surface and therefore, not to lose the information of the species present in the area. 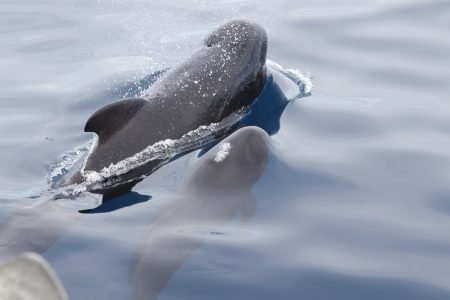 During this campaign, the 8 most common species of cetaceans in the Mediterranean have been sighted. The most observed was the striped dolphin (Stenella coeruleoalba), followed by the fin whale (Balaenoptera physalus). Deep-diving cetaceans have also been observed, such as sperm whales (Physeter macrocephalus), Cuvier’s beaked whales (Ziphius cavirostris), long-finned pilot whales (Globicephala melas), as well as the target species of the SCARS project, the Risso’s dolphin.

We should also highlight a high number of sightings of long-finned pilot whales and a sighting of common dolphins (Delphinus delphis), species that are not observed as frequently in our waters as the rest of the species.

The last species that have been recorded during the project is the bottlenose dolphin (Tursiops truncatus).

The scientific team not only records data on cetaceans but also collects data on sightings of other marine animals, such as seabirds and sea turtles.

During the transects carried out so far, a high number of sea turtles have been detected and a variety of seabirds have been observed, from the three species of common shearwater in the area (Scopoli’s shearwater (Calonectris diomedea), the Yelkouan shearwater (Puffinus yelkouan), and the Balearic shearwater (Puffinus mauretanicus), seagulls, European storm petrel (Hydrobates pelagicus), and even Atlantic puffins (Fratercula arctica), as well as many migratory species, as the Eurasian reed warbler (Acrocephalus scirpaceus).

With these preliminary results where the richness of these waters is reflected, the project will continue in autumn with the aim of obtaining more data on the cetaceans of the submarine canyons of the Catalan coast, and especially on the Risso’s dolphin, to try to determine the status of this species in our waters and to be able to act on its conservation.

Previous Story
Invasive alien species, what are they and how do they do it?
Next Story
Siren’s songs….or phocid’s instead?