SUBMON, the US National Oceanic and Atmospheric Administration, the Oceanografic of Valencia and the Brazilian NGO NEMA will work together during 2017 to study decompression sickness in sea turtles and its incidence in animals incidentally captured by trawl fishing vessels.

Very recently the veterinary team at the Oceanogràfic of Valencia discovered that decompression sickness (DCS), a well known phenomenon among divers, can also affect marine turtles incidentally captured by nets, due to the quick hauling of the nets to the surface and to the stress of the animal. Little is known so far about this disease in sea turtles, but findings in the Mediterranean basin in captive settings show a high prevalence (52-80%) of disease in by-caught turtles coming from these fishing gears. It is estimated that 20% of these animals arrive to the rescue centre with a severity of disease that would lead to death if left untreated. However, it is unclear if the animal would be able to respond somehow in case of inmediate direct release after capture. Assessing the symptoms and prognosis of DCS is therefore of vital importance to fully understand the real impact of net fisheries over sea turtle populations in the worls. 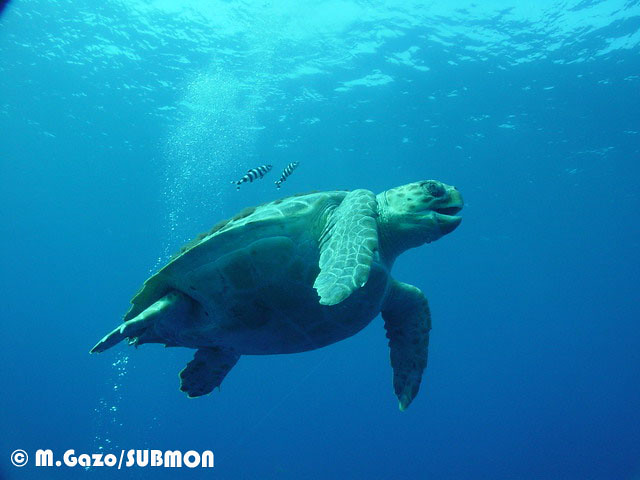 This will be the first time that DCS is studied on board a fishing vessel, working with turtles that have just being captured. Until now all studied animals have arrived into rescue centers brought by fishers and, therefore, have spent several hours on deck after the capture. This project will give researchers the chance to find out how the procedures with captured animals on board the fishing vessel (releasing it immediately vs. keeping it on board for some hours for the animal to rest) might affect the real post-release mortality at sea. The project, financed by NOAA’s Bycatch Reduction Engineering Program (BREP), also wants to look further into the influence of trawling depth and time and of water temperature in the incidence of DCS. 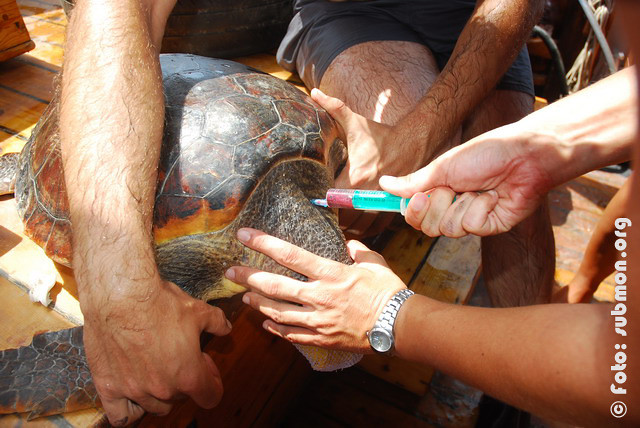 To achieve this Mariluz Parga, a veterinarian from SUBMON, and a sea turtle biologist from the NGO NEMA will work on board a Brazilian trawl vessel during the months of January and July of 2017, assessing each incidentally captured turtle. Every captured turtle will get a full clinical and neurological exam on board, as well as a blood sample taken for a full biochemistry analysis. The presence of air bubbles in the internal organs will be assessed with an ultrasound scan, and finally a pop-up satellite tag will be attached before releasing the animal, in order to find out about the post-release mortality during the first month.

Results will be important to assess the real impact of DCS and trawl fisheries on sea turtle mortality, which might be much higher than previously thought. Another result will be the development of best practices for trawl fishers, adapted to the incidence and severity of this new disease in sea turtles.