From the 10th to the 13th of November the Irish Elasmobranch Group hosted the 14th Annual Scientific Meeting of the European Elasmobranch Association in the city of Galway, Ireland.

During those days over a hundred assistants could learn about the latest researches in different fields related with elasmobranches (biology, fisheries, conservation and awareness). One of the most developed disciplines during the meeting was the use of genetic studies, which are currently used to further the knowledge of shark populations: origin, movements, taxonomy, etc. 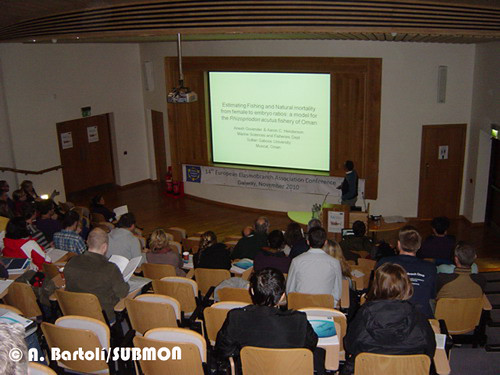 Auditorium of the Marine Institute, where the conference was held

This year the key note speaker was Dr. Nicholas Dulvy, co-chair of the IUCN’s Shark Specialist Group, who talked about the threats and extinction risk of sharks, rays and chimaeras. Other relevant lecturers were Sonja Fordham, who talked about the challenges of shark conservation in Europe, and Francesco Ferretti, who described a model representing the long-term effects of human pressure on demersal shark populations in the Adriatic Sea. In general, during the meeting over 34 oral presentations and 25 poster communications took place. 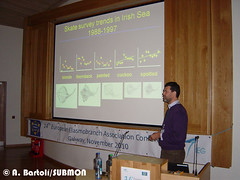 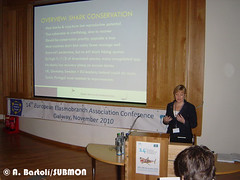 Nick Dulvy (key-note speaker) and Sonja Fordham, during their talks

Finally, during the General Assembly the EEA approved four resolutions regarding 1) the enforcement of EU shark finning regulations; 2) the definition of EU stances at Regional Fishery Management Organizations; 3) urging the European Council to set deep-sea shark catches TACs at zero with no by-catch allowance; and 4) urging measures to ensure improved catch monitoring and precautionary catch limits for Greenland sharks (Somniosus microcephalus), and to promote the study and conservation of this species.

Submon is member of the EEA and national representative of Spain since 2009.

Some of the pages of the SUBMON site contain cookies, which are small data files generated in the computer of the user or client which enable the system to remember the language and site, as well as other characteristics and navigation preferences chosen by the user during their first visit. These cookies are not invasive, nor do they carry virus or personal data, and their only function is to personalise navigation according to the choices made previously by the user. If you wish, you can deactivate and/or eliminate cookies by following the instructions which appear in our Security Recommendations .
Necessary Always Enabled
Necessary cookies are absolutely essential for the website to function properly. This category only includes cookies that ensures basic functionalities and security features of the website. These cookies do not store any personal information.
Non-necessary
Any cookies that may not be particularly necessary for the website to function and is used specifically to collect user personal data via analytics, ads, other embedded contents are termed as non-necessary cookies. It is mandatory to procure user consent prior to running these cookies on your website.
SAVE & ACCEPT
SearchPostsLoginCart
Sea turtles… in Alaska?
Forests of marine animals: the political courage needed to protect them
Sunscreens protect us, but do they harm the marine environment?
We finished the EDUCAMARES project with more than 7,100 sensitized students
What a successful European Maritime Day!
Registration and abstract submission open for Sharks International 2022