In general, bony fish maintain their buoyancy thanks to an organ known as the swim bladder, an organ shaped like an oval sac located in the abdominal area below the spine. This organ is filled with air either through puffs for those fish that have the oesophagus and swim bladder connected (physostoma bladder) or by diffusion of gases from the blood to the bladder (physocist bladder). As air has a lower density than water, this causes a floating effect on the fish.

However, chondrichthyans (fish with a cartilaginous skeleton) such as sharks do not have a swim bladder. How then do sharks solve the problem of buoyancy? Let’s see it. 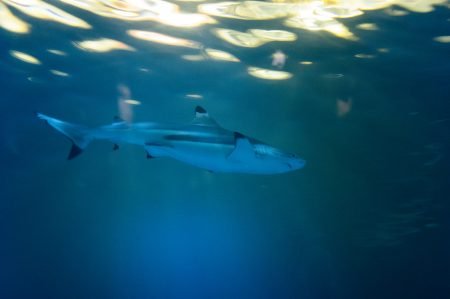 The main element that provides a certain degree of buoyancy to sharks and rays is the presence of a large liver (up to 25% of body weight in some species) that is full of low-density fats or oils and whose component main is squalene. Squalene and other lipids accumulate in large fluid-filled cavities in the cytoplasm of liver cells called fat vacuoles and can make up 80% or more of the liver’s volume.

The liver of sharks has three basic functions: to manufacture enzymes necessary in different metabolic processes; maintain lipid (fat) reserves to use when food is lacking and, finally, act as an organ of buoyancy avoiding the natural tendency to sink.

The fact of presenting a cartilaginous skeleton, of less density than bone, could undoubtedly also be pointed out as a possible adaptation (or at least that helps) to compensate for buoyancy.

Despite having this system, most sharks continue to show negative buoyancy (they sink if they stop swimming) except for some deep-sea species with larger livers, such as a sixgill shark (Hexanchus griseus) where it has been seen that they present positive buoyancy.

Those who continue to show negative buoyancy need some other help to maintain their buoyancy and they do so through movement, that is, swimming. Thanks to the propulsion of the caudal fin and the support of the pectoral fins, they manage to maintain buoyancy, so they cannot stop swimming or they would sink. At this point there is some controversy since some researchers have pointed out that hydrodynamic lift is not achieved only through the pectoral fins, as is believed, but that this lift is also given thanks to the snout and belly flattened in the function of the position that the animal adopts when swimming, providing approximately 30% of its support. By lowering the tail down a little and the head up a little, the animal can maintain buoyancy.

Previous Story
We signed a marine stewardship agreement to promote the conservation of a Natura 2000 area in Cap de Creus
Next Story
All for one and one for all!