The project is funded primarily by the National Fish & Wildlife Foundation and the International Seafood Sustainability Foundation (ISSF), and is a collaboration between SUBMON, EcoPacífico+, the government and the longline fishing sector of Costa Rica and Panama. 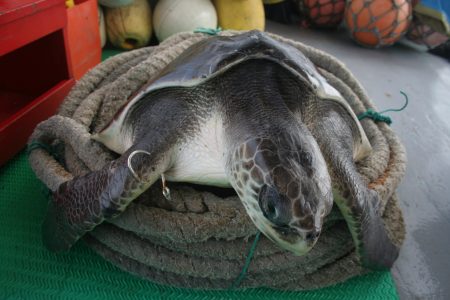 The main goal of this project is to develop and implement an official mandatory course on sea turtle handling and release for the crews of “medium” and “advanced” longline fleets of the Pacific coast of Costa Rica, and to set the mechanisms to implement a similar system in Panama. Both countries are currently very interested in solving their sea turtle bycatch problems as part of their commitment towards responsible fisheries in the face of increasing demand from domestic and international markets for sustainable sources of seafood.

In Costa Rica, previous work was done with the fishing sector in 2016, as part of a project carried out together with the Costa Rican government, with ISSF funding. During that project, more than 300 fishermen from 6 communities were trained, proving the interest of the country’s fishing sector in improving their practices.

Within this new project, the following actions are planned:

All these actions will be supported by an intense communication plan in both countries, to spread the word about this effort among the society, and for the main chefs in the area to support sustainable fishing.

Finally, everything learned will be transferred to the rest of Central American countries, organizing an on-line presentation of the project to government agencies and experts in the region, in collaboration with the IATTC and the Inter-American Convention for the Protection and Conservation of Sea Turtles.

The project is funded primarily by: