Infographic: How are microplastics generated and how do they affect marine life?

It is not new that plastic is everywhere and that it is the most common type of marine litter. It is a very resistant material, too much for the use we give it sometimes, and it means that it never ends up completely disappearing from the marine environment.

Plastic waste can come in many sizes, shapes, and come from a wide variety of sources. Due to the action of certain environmental and biological factors, they are fragmented into smaller and smaller pieces until they become microplastics. The National Oceanic and Atmospheric Administration (NOAA) establishes that a plastic fragment is considered microplastic when its diameter is less than 5 millimeters, and if it has a diameter less than 0.001 it is called nanoplastic.

A few weeks ago we developed a series of contents for a project in collaboration with Lush Spain on microplastics, and we designed this infographic, which tries to explain in a summarized way the problem of microplastics and how they affect marine life.

What can we see in this infographic?

The illustration represents, vertically, the different entry sources of microplastics to the sea and how they can affect the marine food chain. 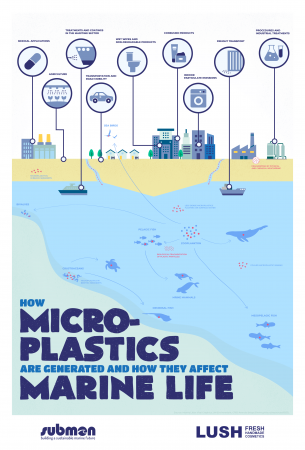 A very common example of waste that ends up in our seas is wet wipes. These wipes are often improperly disposed of through the sewage system, as is the case with other plastic items such as cotton swabs, condoms or pads. This causes that, in addition to clogging the sewer systems, they disintegrate into microplastic particles that end up in seas and oceans. According to a study made by the OCU, no wet wipe, even if it is announced as biodegradable, degrades more than 5% after two months, due in part to the mixture of synthetic fibers that compose them and the preservative substances that these products are impregnated with.

Either way, how do microplastics affect the marine food chain?

It is proven that the small plastic fragments that reach the marine environment are incorporated into the marine food chain, for example, through zooplankton, which ingests them by mistake and accumulates them by not being able to digest them. A study carried out in 2016 showed that the ingestion of microplastics by zooplankton negatively affected the feeding, survival and fertility rates of copepods.

The problem of the presence of microplastics in the marine environment does not only affect the smallest organisms. As seen in the infographic, it also reaches species of bivalves, pelagic fish, marine mammals, crustaceans, demersal fish, and mesopelagic fish. At these higher trophic levels, the concentration of plastic fragments is increasing and they have been detected in the interior of more than 40% of the species of whales, dolphins, porpoises, sea turtles and about 36% of the species of seabirds.

UN Ocean Conference: the need for action to ensure a sustainable future

Notice to mariners! How to watch dolphins and whales in a responsible way?

Every year, individuals of different species are sighted with injuries...

Some of the pages of the SUBMON site contain cookies, which are small data files generated in the computer of the user or client which enable the system to remember the language and site, as well as other characteristics and navigation preferences chosen by the user during their first visit. These cookies are not invasive, nor do they carry virus or personal data, and their only function is to personalise navigation according to the choices made previously by the user. If you wish, you can deactivate and/or eliminate cookies by following the instructions which appear in our Security Recommendations .
Necessary Always Enabled
Necessary cookies are absolutely essential for the website to function properly. This category only includes cookies that ensures basic functionalities and security features of the website. These cookies do not store any personal information.
Non-necessary
Any cookies that may not be particularly necessary for the website to function and is used specifically to collect user personal data via analytics, ads, other embedded contents are termed as non-necessary cookies. It is mandatory to procure user consent prior to running these cookies on your website.
SAVE & ACCEPT
SearchPostsLoginCart
Caulerpa cylindracea, reloaded.
UN Ocean Conference: the need for action to ensure a sustainable future
Notice to mariners! How to watch dolphins and whales in a responsible way?
Sea turtles… in Alaska?
Forests of marine animals: the political courage needed to protect them
Sunscreens protect us, but do they harm the marine environment?