First series of training workshops directed at U.S. commercial longline fishermen successfully completed in the Gulf of Mexico and the East coast

SUBMON, the US National Oceanic and Atmospheric Administration (NOAA) and the International Seafood Sustainability Foundation (ISSF) have completed during the month of April the first series of training sessions in the U.S. with very satisfactory results, working along the fishing harbors of the Gulf of Mexico and the East coast.

This project, financed by NOAA’s BREP and the ISSF, aims to increase the post-release survival of marine turtles after interaction with US commercial longline vessels through the training of fishermen in the best handling, dehooking and release techniques of accidentally captured turtles. The project is to be carried out in the Gulf of Mexico, East coast and Hawaii, in close collaboration with the staff of the Southeast Fisheries Science Centre and the Pacific Islands Regional Office. 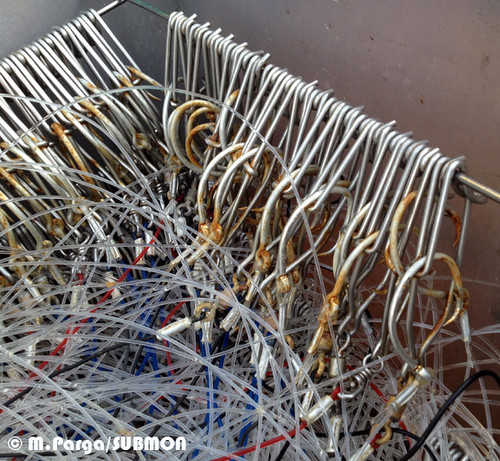 The first series of training workshops was completed during the month of April in harbors of Florida (Panama City, Madeira Beach), Louisiana (Houma-Du Lac), Maryland (West Ocean City), North Carolina (Morehead) and South Carolina (Port Royal and Cherry Point). An extra training workshop was done during the annual meeting of the Blue Water Fishermen Association in Atlantic City, New Jersey. A total of 90 longline fishermen, boat owners, fish processors, tackle dealers and enforcement officers were engaged in these workshops. Furthermore, about 20 recreational hook and line fishermen were approached on piers of Madeira beach area (Florida) to explain them the best handling procedures if they accidentally captured a marine turtle. 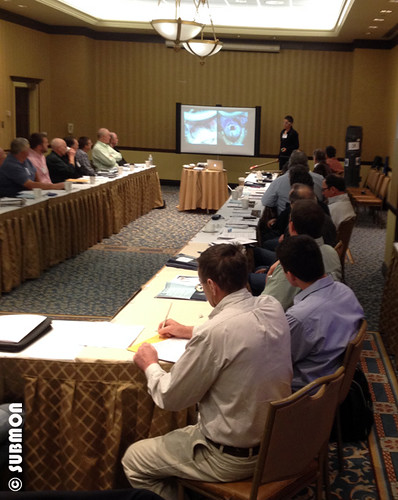 Talk during the annual meeting of the Blue Water Fishermen Association in Atlantic City, New Jersey 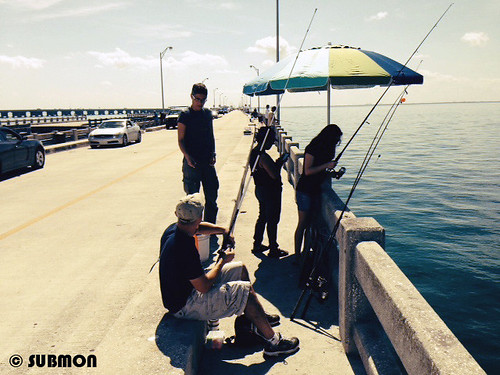 Talking to recreational hook and line fishermen on a pier close to Madeira Beach, Florida

A talk and a practical session were also completed during the Sea Turtle Medicine Workshop organized within the 34th Annual Symposium on Sea Turtle Biology and Conservation, which took place in New Orleans in April. Approximately 100 professionals from all over the world related to marine turtles attended this talk, while only 15 were allowed to the practical part for logistic reasons. 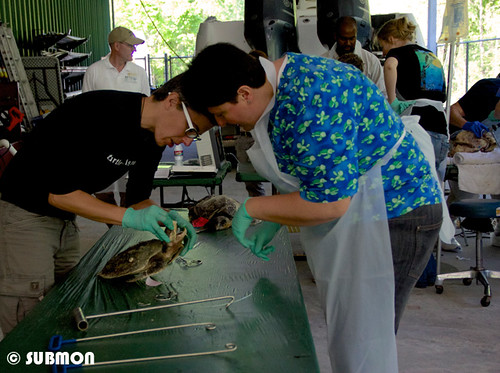 Showing a student how to remove a hook from a turtle’s mouth in the practical session during the sea turtle medicine workshop in New Orleans, Louisiana

The next series of training workshop will be carried out in Hawaii, in collaboration with staff of the NOAA Pacific Islands Regional Office, and directed to commercial longline fishermen, fishery observers, and trainers from the NOAA regional office in Honolulu.

SUBMON would like to thank C.Bergmann, from NOAA’s Pascagoula Laboratory, for previously organizing all the workshops in the Gulf of Mexico and the East coast, and for accompanying SUBMON’s veterinarian during all the work, introducing her to the fishermen and taking part in all the workshops. Without him the number of fishermen reached would have been much smaller.

Some of the pages of the SUBMON site contain cookies, which are small data files generated in the computer of the user or client which enable the system to remember the language and site, as well as other characteristics and navigation preferences chosen by the user during their first visit. These cookies are not invasive, nor do they carry virus or personal data, and their only function is to personalise navigation according to the choices made previously by the user. If you wish, you can deactivate and/or eliminate cookies by following the instructions which appear in our Security Recommendations .
Necessary Always Enabled
Necessary cookies are absolutely essential for the website to function properly. This category only includes cookies that ensures basic functionalities and security features of the website. These cookies do not store any personal information.
Non-necessary
Any cookies that may not be particularly necessary for the website to function and is used specifically to collect user personal data via analytics, ads, other embedded contents are termed as non-necessary cookies. It is mandatory to procure user consent prior to running these cookies on your website.
SAVE & ACCEPT
SearchPostsLoginCart
Caulerpa cylindracea, reloaded.
UN Ocean Conference: the need for action to ensure a sustainable future
Notice to mariners! How to watch dolphins and whales in a responsible way?
Sea turtles… in Alaska?
Forests of marine animals: the political courage needed to protect them
Sunscreens protect us, but do they harm the marine environment?