Neptune seagrass (Posidonia oceanica) is a marine plant endemic to the Mediterranean Sea, which is found perfectly on soft substrate. It forms meadows that are distributed from the surface to more than 40 meters deep.

This species plays a key role in a few geomorphological and ecological processes, such as recycling nutrients by reducing hydrodynamism, improving sediment stability, providing food for herbivorous fauna, providing protective and breeding habitat for many species, being an important CO2 sink and even being important for climate change adaptation. 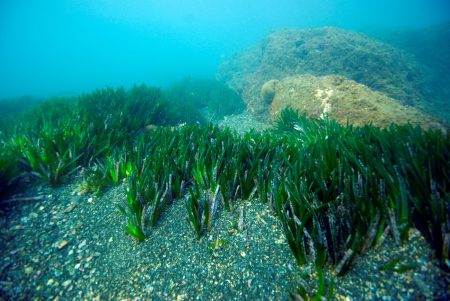 But did you know that Neptune seagrass leaves have also been historically important thanks to their properties?

And are the leaves actually used for anything?

The truth is yes, in some areas of the Mediterranean Sea, Neptune seagrass leaves are still used to extract iodine, as construction material and even to make paper pulp.

Related to the use of posidonia, researchers from CIAL (Instituto de Investigación en Ciencias de la Alimentación) and IATA-CSIC (Instituto de Agroquímica y Tecnología de Alimentos) have developed a bioactive cellulosic aerogel from posidonia waste biomass. These aerogels have antioxidant properties that have proven to be useful for improving the preservation of packaged meat, when used as absorbents for the trays of these fresh products.

You can find out about the uses of seagrass by reading this article.

Can Neptune seagrass remains from beaches be used?

Most of traditional uses have been lost, and the leaves, or other remains of Neptune seagrass, are no longer collected for use. Currently, and in most cases, the remains of the leaves, rhizomes and posidonia balls are considered waste and are actively removed to leave the beaches “clean”.

On the Spanish coast, although it is a protected species and habitat, there is no specific regulation on the removal and use of the remains of Neptune seagrass. Only in Catalonia there is a regulatory framework, with the Order of July 31 1991, which prohibits the destruction, sale, purchase and use of Neptune seagrass and other marine phanerogams.

Our expert believes that…

To consider the remains of Neptune seagrass on the beaches as waste and to value it as such is a mistake. These remains have an important ecological function when they are on the beach as they are an essential part of nutrients for the dune systems, a feeding area for crustaceans and seabirds and, above all, an efficient system of erosion control of the loss of sand from the beach itself.

Its consideration as waste or its extraction for industrial uses can cause the loss of this fundamental ecological function of Neptune seagrass.

And you, what do you think? Do you consider that Neptune seagrass is a waste and that it has to be removed from the beaches?