The IUCN (the International Union for Conservation of Nature) is an international organization for the preservation of natural resources. This month, the IUCN had included the fan mussel (Pinna nobilis) in the Red List of Threatened Species as a critically endangered species. We will explain you what this category means and which measures of conservation they had suggested.

The Red List is the most popular inventory around the world about the threat status of the marine biodiversity of the planet. This list includes nine categories, three of which are considered as threatened: “Vulnerable”, “Endangered” and “Critically endangered”. There is a quantitative frame for any specie:

It is considered that a species is “vulnerable” when it presents a high chance to become an endangered species.  In this category, you can find marine species as the white shark (Carcharodon carcharias), the loggerhead turtle (Caretta caretta) or the fin whale (Balaenoptera physalus).

A species is considered “endangered” when it has a very high risk of extinction. There are marine species in this category as the Mediterranean monk seal (Monachus monachus) or the Basking shark (Cetorhinus maximus).

When you find a species that is extremely endangered it is catalogued as “critically endangered” in the Red List. There are marine species in this category like the great hammerhead (Sphyrna mokarran) and, since a few days ago, the fan mussel (Pinna nobilis).

The fan mussel is a marine bivalve mussel endemic in the Mediterranean Sea, which is related to the meadows of marine phanerogam, mostly of Posidonia oceanica. It is declining in all the Mediterranean area because of the mass mortality that was detected in 2016 along the Spanish coasts. 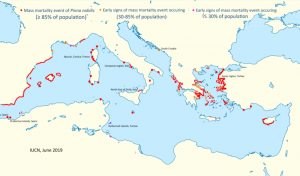 The mortality outbreak, which is still affecting the fan mussel, was caused by a pathogen (Haplosporidium pinnae) which has spread quickly along the Mediterranean Sea, causing mortality taxes around 80-100% in many regions. Only a few populations remain free of this pathogen. However, they are geographically isolated and located in areas with very specific environmental conditions.

This December, the IUCN published the inclusion of the fan mussel in the category of critically endangered species, as well as some recommendations for its conservation.

Recommendations on the conservation of the fan mussel

It emphasizes the urgent need of establishing a regional monitoring program which allows the exchange of information and observation along the Mediterranean Sea. It also recommends keep investigating about the pathogen in order to better understand the disease and prioritise the protection of the specie and its habitat, both in non-affected areas and those which host survivors with a high potential of recruitment.

Previous Story
The Barcelona Declaration: Together for Marine Mammal Science and Conservation of Marine Mammals
Next Story
We start EDUCAMARES project, with the support of Fundación Biodiversidad