In 2002, the Ministry of the Environment carried out a study in the Spanish Mediterranean to designate areas of importance for cetaceans. The “Proyecto Mediterráneo” proposed an area of ​​about 45,000 km2 for inclusion in the List of Specially Protected Areas of Importance for the Mediterranean (ZEPIM List), within the framework of the Barcelona Convention, the Migration Corridor of Mediterranean cetaceans, which was not declared a Marine Protected Area until 2018. 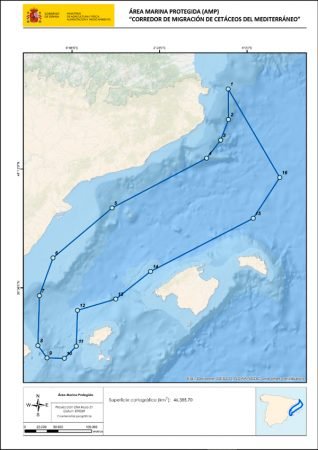 In 2010, within the framework of the LIFE + INDEMARES project “Inventory and designation of the Natura 2000 Network in marine areas of the Spanish State”, SUBMON carried out an inventory and characterization of cetaceans in some of the proposed areas. One of these areas was the Cañón de Creus, which belongs to the LIC ESZZ16001 Western Submarine Canyon System of the Gulf of Leon. At the time, only a few days provided the opportunity to take data, but some sightings of lone sperm whales associated with an acoustic feeding pattern in the same area left a door open for future research. 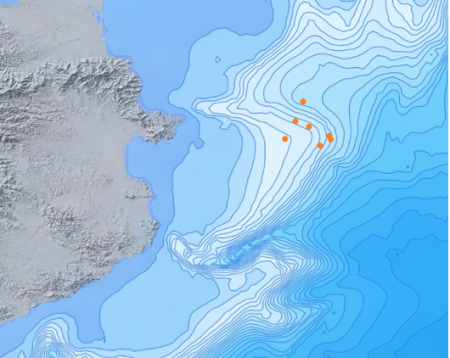 Ten years have passed since then and this 2020, with the support of the Fundación Biodiversidad of the Ministry of Ecological Transition and Demographic Challenge, has been able to carry out the AHAB project which, despite a past curiosity, has tried to go a little further on, raising the hypothesis that the northern area of ​​the marine protected area of ​​the Mediterranean Cetacean Migration Corridor may be a potential habitat for deep divers. To achieve this, two blocks have been set up that have been prospected for a month in search of these divers. 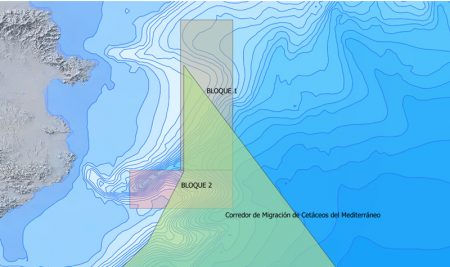 How did we have done it?

The standard method used to estimate the abundance of wildlife populations is a remote sampling. This method is implemented in the study area through the design of random linear transects, with specific software, so that the same probability of coverage is achieved throughout the area. The density estimate along the transect is calculated using a detection function with the perpendicular distances of the groups of animals observed, thus estimating the effective bandwidth on each side of the transect. Once these results are obtained, the estimated density is extrapolated to the entire study area.

In order to apply this method of study to the different areas, a series of random, zigzag transects have been designed, which has been repeated several times, in order to obtain a recommended sampling for reliable estimation. During the transects, a visual and acoustic census was carried out, using a two-channel hydrophone that was dragged about 150 meters behind the boat. 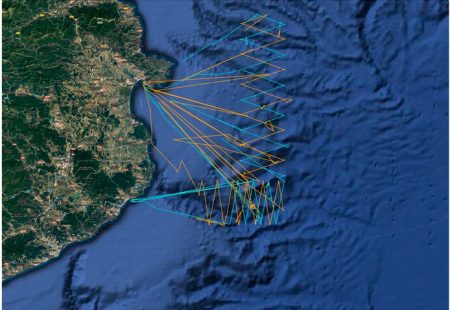 This required a boat, the Montagu catamaran. A catamaran was chosen for comfort at work, stability and comfort onboard, which is necessary for long days at sea. The positions during the shifts have been 5: one person in the hood, another in the bow, another taking data on the computer, another supporting between the sight and the hood and the one who takes data to be able to transmit the information and, finally, another one in the hydrophone to realize the listens. Angles and distances were taken with an angle conveyor and cross-linked binoculars, which then allow a perpendicular distance.

Once the animals were detected with the hydrophone or visually, the information was collected in a specific program and photographs of the individuals were taken whenever possible to add them to the photo-identification catalogs we already have for some species.

After almost 2000 km we have more than 80 visual sightings and much other acoustics, mostly dolphins, but also quite deep divers, of which the 4 expected species have been observed: sperm whale, Cuvier’s beak whale, Risso’s dolphin and long-finned pilot whale.

The results will be analyzed in the coming months and hopefully can be conclusive enough to determine the importance of the area for deep divers as well as cetaceans in general.

This project has the support of:

Previous Story
The Arctic, one of the planet’s most sensitive regions to climate change
Next Story
The environmental impact of illegal mooring

What is your superpower?

Sea stars are invertebrate animals and belong to the phylum...

When orcas are two-legged...

SAVE & ACCEPT
SearchPostsLoginCart
Basking shark: a harmless giant in our waters
New campaign within the LIBERA project to remove large-scale waste
What is your superpower?
When orcas are two-legged…
Ultra Clean Marathon: the challenge that helps nature!
On a Mediterranean route