The Club Nàutic Estartit, together with SUBMON, carry out a study to improve the management of the use of recreational boating based on the application of the Acceptable Change Limit (LAC) methodology in the Montgrí, Medes Islands, and the Baix Ter Natural Park.

What is the Acceptable Change Limit (LAC) methodology?

In contrast to the management of natural spaces based only on the limitation of the number of visitors, the processes that consider the Limits of Acceptable Change (LAC) promote adaptive management of the space based on the definition of acceptable conditions, both social and environmental conditions and following procedures used to monitor and guarantee these conditions.

The objective of LACs is to find the optimal balance between the environmental, social, and economic needs of the space. These considerations change the focus on the load capacity of recreational boating, which is no longer related only to the number of boats that fit in an area, but to the use that can be accommodated within the space without generating environmental impacts and social policies not accepted by visitors and maintaining the proper economic dynamization of the territory. 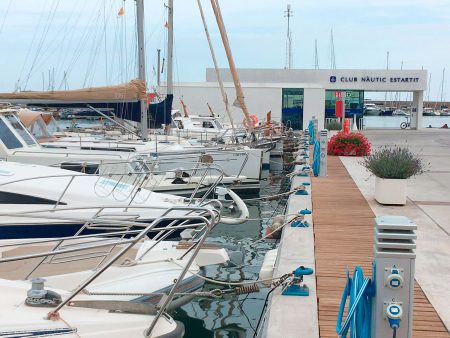 The study is carried out based on information provided by the members of the Club Nàutic Estartit, through surveys that include key indicators to describe the social and environmental conditions associated with the LAC standards. Thus, in addition to collecting data on the biophysical conditions or the level of use of the area, we want to focus on aspects such as the perception of users about the number of boats, to know if they are in agreement with the current number; in the effects of the distance between vessels on the well-being of the users, to see if an increase in that distance increases or reduces the well-being of the users; or in the user satisfaction with the experience of the area, among others.

The main goal of this study phase is to obtain a representative sample of approximately 300 surveys, the equivalent of more than 10% of the members and users of the Estartit and l’Escala yacht clubs, in order to obtain a relevant amount of data that helps to define the new lines of space use management. Thanks to this information, it will be possible to work on establishing measures of use for recreational boating where environmental and social conditions accepted by users and with which they feel comfortable are maintained.

Minimize the impact of recreational boating on Posidonia

The posidonia (Posidonia oceanica) is a seagrass endemic to the Mediterranean Sea. It is a protected species that plays a key role in a whole series of geomorphic and ecological processes.

The increase in tourism and nautical sports has had a high impact on underwater habitats, causing, among other things, the degradation of seagrasses. The increase in the number of recreational boats has also highlighted the negative effect of anchoring on posidonia habitats especially.

The fact of minimizing or eliminating the impact produced by the anchoring systems in points of the coast of extreme fragility and of high ecological and landscape value allows guaranteeing the conservation of the posidonia meadows, and even increasing their surface between 1 and 6 centimetres per year approximately.

The Montgrí, Mede Islands and Baix Ter Natural Park has launched a series of actions with the aim of regulating recreational boating and protecting posidonia in areas where this protected species are present. The main actions have focused on the installation of ecological mooring buoys in the Pedrosa and Ferriol coves. These new buoys are added to the anchoring points already installed in the Medas Islands and those that the Torroella de Montgrí-Estartit City Council installs annually in Cala Montgó.

Previous Story
Why do groupers sing?
Next Story
Filling the gap: possible needs in terms of blue careers