The city of Baltimore (USA) has hosted the 33rd edition of the International Sea Turtle Symposium. During one week over 1,000 researchers from up to 75 countries had the chance to interact, exchanging experiences, presenting their recent work, and attending specialized workshops on satellite tracking, dive behavior, or statistics and data analysis, among others.

Submon was co-author of two oral presentations, one comparing the longline capture rate of sea turtles by circle and J hooks in the Eastern Pacific Ocean, and the second one describing the satellite tracks of tagged marine turtles in the Mediterranean Sea. One of the most interesting presentations was probably the one by K. Mansfield, showing the first satellite tracks of neonate green turtles released from the coasts of Florida and swimming towards the North of the Atlantic Ocean.

Lecture during the workshop on sea turtle medicine and rehabilitation

As in previous editions, Submon took part in the organization of the workshop on sea turtle medicine and rehabilitation, which this year had over 100 attendees. Key sea turtle veterinarians from USA and Italy gave master presentations on subjects such as wound care, necropsy, use of ultrasound, or interpretation of X-Rays. After the lectures there was time for questions and discussion with the lecturers and among the attendees. The lecturers also had the opportunity to exchange surgical experiences between them while opening a dead sea turtle that was available at the Baltimore Aquarium. 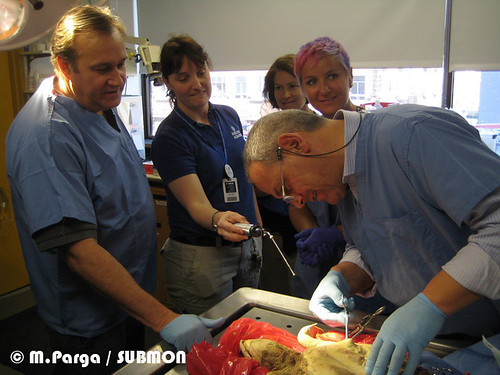