30 years since the launching of the Natura 2000 Network

The beginning of the Natura 2000 Network: Birds Directive and Habitats Directive

Today, the Natura 2000 Network is a key tool for the protection of the European Union’s biodiversity from the impact of human activities. Its main goal is to ensure biodiversity through the conservation of Europe’s natural habitats and wild flora and fauna.

The protected areas of the Natura 2000 Network are designated according to two complementary community directives: 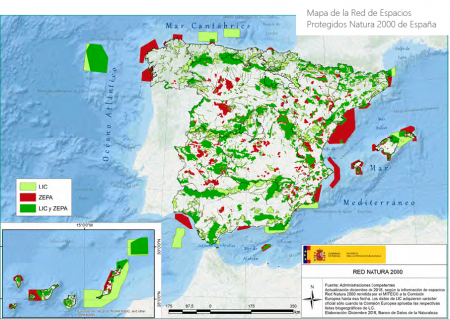 The Birds Directive was approved in 1979 in response to the concern about the decline experienced by the populations of various species of migratory birds and native birds in the European territory. The Habitats Directive was created in 1992 and its inclusion in Spanish law through Royal Decree 1997/1995, of December 7, establishing measures to contribute to guaranteeing biodiversity through the conservation of natural habitats and wild fauna and flora, initiated the process of implementing the Natura 2000 Network in Spain.

Some of the Natura 2000 Network benefits

The Natura 2000 Network, in addition to safeguarding biodiversity goal, provides society with great benefits as an element that mitigates climate change, regulates the water resources we drink and use in agriculture, farming, industry, etc., or mitigates the effects of floods, droughts or fires.

Natura 2000 areas also provide a wide range of socio-economic benefits and services to society. For example, despite the difficulty of quantifying the degree of influence of each marine protected area on fishery resources, numerous studies conducted in more than 124 marine reserves around the world show that, on average, marine reserves produce increases of 21% in the number of species, 166% in the number of individuals per area, and a remarkable 446% increase in total biomass relative to unprotected areas in the vicinity (Lester et al., 2009).

Furthermore, it has been estimated that the conservation of 20 to 30% of the world’s oceans through a network of marine protected areas could result in one million jobs and marine fisheries catch valued at 62.5 to 71.5 billion euros per year (Balmford et al., 2004). In other words, every euro invested in conserving the sea would yield economic benefits of 4 euros.

However, despite the fact that 4 out of every 5 people in Spain live very close to a Natura 2000 Network area, there is a high degree of ignorance of the network among society. If we want to continue enjoying all the benefits it brings to people and the planet, it is necessary to work to ensure that the population is not only aware of the existence of the Natura 2000 Network and its benefits, but also that there is a real interest in the development and conservation of this network of protected areas.